The project was launched in December 2019 in Italy (Bologna) and its main objective is to strengthen the existing mechanisms of recognising and validating non-formal and informal knowledge and skills corresponding to levels 1 and 2 of the European Qualifications Framework (EQF). The project goal is to obtain four intellectual outputs:

EFA EL LLANO, will be responsable for the third part of the project:  “User guide”.

The project can be better understood by looking at the comparison of educational levels: Spanish National Qualifications Framework (NQF-CNCP) and the European Framework (EQF). 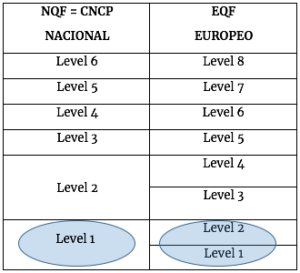 Among all the countries associated to this project (Portugal, Belgium, Italy and Spain) only Portugal and Spain have a process of recognition, validation and certification of professional competences at national level, with a National Qualifications Framework.  In the first phase of the project, after defining the national levels and their equivalence in the European framework, the collaboration of experts from inside or outside the organisations are thought to validate and add value to the first intellectual output (Processes and procedures for the recognition and positioning of learning in levels 1 and 2 of the European Framework-EQF).  For this purpose, the so-called “workshops” have been created so as the expert advisors give their opinion. 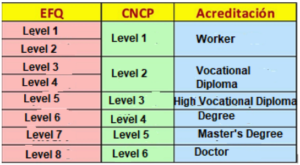 The project relies on the following asumptions:

– The Level 1 of the Spanish Qualifications Framework (NQF-CNCP) is equivalent to level 1 and 2 of the European Framework, and therefore they are to be considered the lowest levels of qualification that are contemplated in Spain in order to be able to make an equivalence with the European level 1.

– The Spanish Framework (NQF-CNCP) has no benchmarks and recognition for professional level 1 European Framework, except for lifelong learning.

– Many adults (young people) do not go on to higher education and enter the labour market into various functions without having a specific qualification.

– Currently, there is a process of legislative change in education, which affects the levels contemplated in the Envol project.

Under the direction of the Portuguese partner (Santa Casa de la Misericordia) a common reference model is being developed to establish the positioning of the candidate competences at the levels under study.

In the next phase, the third, EFA EL LLANO will lead the development of the user guide, whose objective will be to shed light on the process of recognition and validation at the European level.

After several months of hard work and learning, the project SCoopConSS (Social Cooperative Contest for Secondary Schools) reaches its final stage. The more than 150 students from the different participating centres will have to design the proposals for the social cooperatives to be presented at the Spanish national contest. A total of nine Spanish schools take part: the IES Puertas del Campo in Ceuta, the EFA La Malvesía in Valencia, the C.D.P Atlántida CIDEP in Granada, the IES Simón Pérez in Las Palmas de Gran Canaria and the IES Ángel Corella, the IES Francisco Tomás y Valiente, the Cooperativa de Enseñanza José Ramón Otero, the IES Pedro de Tolosa and the Colegio Santa María del Carmen in Madrid.

The project, co-financed by the European Union under the frame of the Horizon2020 funds, counts on the participation of seven organisations from five southern European countries: the FPEmpresa VET Schools Association and the Italian Chamber of Commerce in Spain, aCapo Società Cooperativa Sociale Integrata and EGInA Srl. in Italy, AKETH-DCT (Tesalia Development Centre) in Greece, the Portuguese Association of Startups (APSU) in Portugal and the Rijeka Technical Culture Centre in Croatia.

SCoopConSS is aimed at facilitating teachers a source of high-quality materials regarding social entrepreneurship. This way, teachers can access the necessary tools to help students explore a business model such as the cooperatives and, parallelly, the Sustainable Development Goals set by the UN.

The Projects Director and Associated Centre Office of FPEmpresa, Elena Argudo, highlighted that “SCoopConSS is a project intended to bring students closer to an entrepreneurship model that has a lot of advantages and that it is directly related to the Sustainable Development Goals”. “It is a project that leads to the reflection on the importance of companies being committed to these goals because the companies of the future will be those that know how to link their business model to a sustainable project”, she added.

During the execution of the SCoopConSS project, each school has participated in six workshops, that have tackled the following topics: characteristics of cooperatives, Sustainable Development Goals, Canvas Next as a tool to analyse a business model, market research, business planning, communication and marketing. Apart from these six workshops, some special sessions have also been organised. In these, students have had the opportunity to know the experience of real cooperatives first-hand. Some of these cooperatives were: Agresta, Wazo, La Corriente, La Osa Coop, Cooperativa Redes, Por Siete, Aplica and Kinema.

From now and until the next 18th of June, the different teams will be working on the development of their idea for social cooperative, which they will present at the Spanish national contest. The winning team will be awarded a trip to Florence next September to present their proposal at the international contest, where they will have to compete against the rest of the participating countries, which are also in the final stage of the project. Argudo concludes: “A challenge is given to students with the motivation of participating in a national contest that, if won, gives them the opportunity to present the result of their work at an international level, in an incomparable scenario such as the city of Florence”. 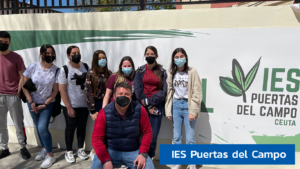 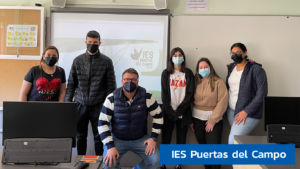 FPEmpresa VET Schools Association has participated in the second PLA (Peer Learning Activity) of PRALINE project (Promoting Adult Learning in Networks), which has been focused on sustainability in the field of lifelong learning.

In this second PLA, all the organisations that make up the project have taken part, as well as a representative from the European Commission, Martina Ni-Cheallaigh, who shared a presentation on the European Union’s challenges on sustainability, greening and circular economy.

“We want a strong social Europe; a Europe that abides by the values of the Treaty; a Europe that is just for everybody and leaves nobody behind”, she highlighted. She also stated: “With this purpose in mind, we have the European Green Deal, the program for digitalization and digital transformation and the Green Paper on aging”. “The idea is to have an economy that works for everybody”, she added.

The session was hosted by the French organisation Union Nationale des Maisons Familiales Rurales d’Education et d’ Orientation, that presented the Maisons Familiales Rurales (MFR) and the overall structure of VET in France. In addition to this, three best practices were shared, two from France on the different learning environments and inclusion, respectively, and one from Slovenia, on the education for the EU Green Deal through VET providers.

The next PRALINE session is expected to take place by the end of September this year. If circumstances allow it, it will be held face-to-face for the first time since the project started.

Digital Transformation in Advanced Manufacturing: An Integral Training Curriculum for EU technicians to deploy and manage digital tools in Smart Manufacturing or DTAM in short, is a three-year Sector Skills Alliances in VET project, cofunded by the Erasmus+ program of the EU.

The coordinator of the DTAM project is the associated centre of FPEmpresa VET Schools Association, Politeknika Ikastegia Txorierri, S. Coop., partnering with a total of 10 other organisations from 5 European countries. Politeknika Txorierri is a VET and HVET centre in the Spanish Basque Country. The school specializes in: Environmental Control & Education, Telecommunications and Information Technology, Robotics, Sales and Commercial Management, Mechanical Design, Mechanical Production and Machining.

The DTAM project comes in answer to an ever-increasing need for the upskilling and reskilling of technical workers and students in the EU to help improve their employability in a skills intensive fast evolving labour market i.e. advanced manufacturing (AM). According to Josu Orbe, general director of Politeknika Txorierri, DTAM will contribute to the mission of this centre to be a point of reference for companies and leaders in the comprehensive and continuous training of people, and in their adaptation to this ever-changing technological world. The project will also address other multiple needs which have recently became even more evident because of developments such as the COVID-19 pandemic and its aftermath. Among those needs are the (1) digital and technical skills mismatches in demand and supply of labour, (2) demand for sector-tailored industrial workers, (3) lack of recognized VET programs on the topic and a practical training through access to developed IoT (remote) labs and WBL and last but not least (4) the need for an updated training for low or under-skilled adult workers threatened by replacement or obsolescence due to technological advances.

FPEmpresa VET Schools Association, along with more than twenty European institutions from the field of education, took part in the first peer learning activity of PRALINE project (Promoting Adult Learning in Networks), that dealt with adult education and training.

This first session of workshops and lectures counted on the active participation from FPEmpresa and the Association of public VET centres from the Basque Country Ikaslan Bizkaia. FPEmpresa explained the structure of adult education in Spain as well as its main characteristics, and also presented the company Haizea Wind Group, represented by the HR Manager, José Colsa, as an example of good practices. More specifically, this company described its project aimed at creating a specific school for welding, in collaboration with Centro de Formación Somorrostro, with the purpose of training qualified staff for the companies within the holding company. As for Ikaslan Bizkaia, they highlighted some distinctive elements of the Basque education system with regard to adult education. Then it was the turn for The Finish Association for the Development and Vocational Education and Training AMKE to share with the attendees the latest reforms carried out in Finland and their impact on adult education. To conclude, a panel discussion, led by Marguerite Hogg from the Association of Colleges (AoC) in the UK, was held. During the debate, some specific issues related to the adult education sector were discussed. The whole session was moderated by Manfred Polzin, from MBO Raad, PRALINE’s coordinating institution from The Netherlands.

The general objective of this project is to strengthen the already existing transnational networks of adult education providers via mutual learning, peer counselling and capacity building.

PRALINE has been presented under the frame of the Erasmus+ programme, within Key Action 3: Support for policy reform, and under the specific subaction «Social inclusion and common values: the contribution in the field of education and training».